When I fry rashers (slices) of Pork Belly for, say, breakfast, I often cook more than I will eat for that meal. Generally, I bake the slices first, and drain off the nice, pure clear fat, for use in cooking other dishes. I then fry what I wish to eat immediately, and store the remainder for later meals.

The Crispy Pork with Green Peppers shown above is a typical, very easy dish, one can make with ‘leftover’ cooked Pork Belly. Here, it is fried until crispy, the stir-fried with blanched Green Pepper chunks and White Onion, in a simple little glaze of Soy Sauce and Sugar.

Here are all the ingredients you require for cooking Crispy Pork with Green Peppers. As you can see there are only five. The Pork, at the left, is cut into sections and is obviously already cooked.

It is optional here, but if you blanche your Green Pepper pieces in boiling Salted Water for 30 – 60 seconds and plunge them into cold water immediately, they will have a lovely bright green color that will remain during cooking.

The seasoning are extremely simple here. If you like, you could certainly replace the Soy Sauce with a bit of Oyster Sauce and Rice Wine, or anything else you fancy. This is one of those sorts of dishes where there is all sorts of scope for improvising.

First heat your wok to medium to high. Since you are using a meat that is fairly fatty already, you will only need to add a bare teaspoon of oil to the pan. Let the oil come to the smoking point and then throw in the pork.

Allow the meat to sizzle in the pan and then keep stirring, turning the pieces over and letting them get crispy and browned. The slices will throw of quite a bit of fat as they cook and this will help with the browning.

When the pork is done to your liking, drain off enough fat to leave no more than a tablespoon in the pan and add the onion and the peppers. Keep stir-frying until the onion just starts to become translucent and then add the soy sauce. Toss a few times until the Soy-Sugar mix forms a glaze and then plate.

This dish can serve 4 as part of a Chinese meal featuring Rice and a few other dishes. Here, I made a breakfast of one portion along with some Chinese style Stir-fried Eggs with Tomatoes. If this strikes as an odd sort of breakfast combination, don’t knock it until you try it. It is, after all, just a slightly different take on the standard Bacon and Eggs. 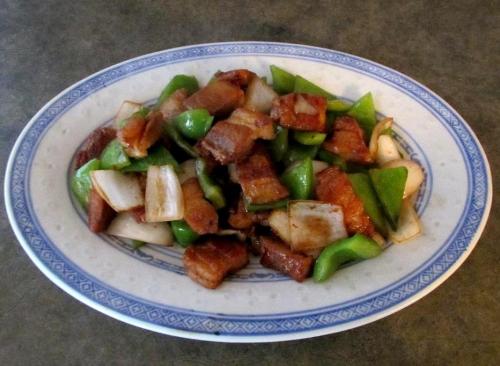