This dish was inspired by the description of a dish of ‘Lemongrass Chicken’ a friend of mine once tasted and liked very much. I decided to use just wings for this recipe and make it more of an appetizer than a main dish of larger chicken parts as was described. Lemongrass is the dominant aromatic component here but, with the amounts I have used, it comes through as more of a delicate highlight rather than an in-your-face flavoring.

The recipe here calls for both fresh lemongrass sections as well as a tablespoon of lemongrass paste. You can make your own paste by grinding an additional section of lemongrass in a mortar (a food processor won’t do the job properly), or you could use a commercial product such as Lemongrass in a Tube. I don’t really recommend the latter, but if you go this way, you may wish to up the amount of paste to as much as two tablespoons.

The poaching of the wings for the preliminary cooking produces a terrific gelatinous stock which you may wish to save, as per the images and notes following the Basic Method instructions.

Heat 2 cups of water in a small saucepan over medium heat. Give the lemongrass a good whack with the flat edge of a knife to partially crush it and then add the pieces to the water along with the sugar, the ginger and the soy sauce. Allow this simmer for a good thirty minutes or so until the water is infused with the flavors of the ginger and lemongrass.

While the pot is simmering, use the tip of a sharp knife and prick the wings all over to help them absorb flavors. At the end of the simmering time, add the wings and turn up the heat. As soon as the water begins to boil, immediately cover and remove the pan from the heat. Let it sit until it cools to room temperature. At this point, you can proceed directly to the next step, or else put the pot in the fridge until you are ready for the final cooking. Doing this is not strictly necessary, but allowing the wings to sit in the cooking fluid for as long as possible will allow more flavor to penetrate the flesh.

When you are ready to cook, drain the wings, discarding the ginger and lemongrass, and pat them dry with a paper towel. Then, heat your wok over a moderately hot flame and add a tablespoon or two of oil. When the oil is hot, add the wings and sauté until they are nicely browned, sprinkling with the pepper as you do so.

Once the wings are done, remove them from the pan for the moment and add the shredded ginger. Let this brown ever so slightly and add the lemongrass paste and the lime juice. As soon as you smell the aroma, toss the wings back into the mix and stir until they are glazed and the lime juice has largely evaporated. Add the shredded scallion, reserving about a quarter of it for garnish, and toss a few more times until the scallion is wilted. Plate and garnish with the remaining scallion shreds before serving.

For this particular dish, I let the wings chill in the poaching liquid overnight. If you look closely, you can see that the resultant stock has formed a thick jelly. This is something you usually only see after cooking stocks for a very long time and it is worthwhile saving the result for other uses.

From the dozen chicken wings (and only the middle portions at that), I achieved a cup of lovely thick stock using only two cups of water. This batch, flavored as it is with lemongrass, would probably make a great base for a Thai style sour shrimp soup, but would also be terrific as the sauce base for other stir-fried dishes. 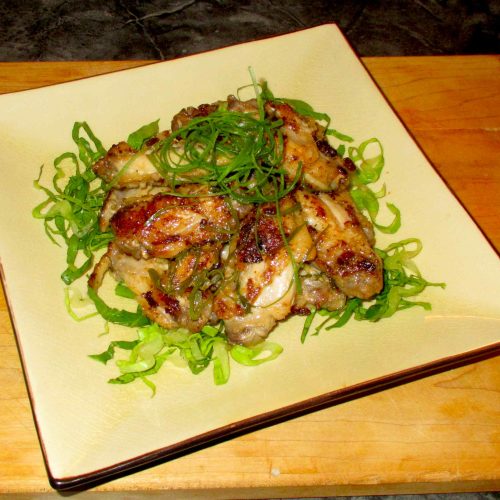